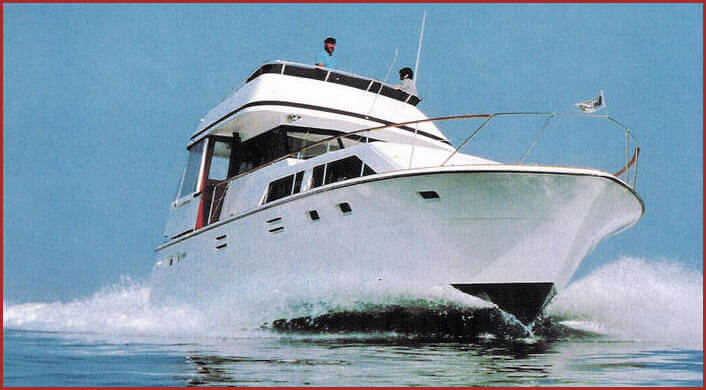 THE TROJAN F-44 Motor Yacht was launched just a little too late to make the Miami International Boat Show last February but photographs of her were available during the show. They revealed a luxury fiberglass yacht that was certainly worth a firsthand look. To that end, I spoke to Hal Hofmeyr, who was soon to take her on a dealer-to-dealer run between New England and Florida, and it was agreed that I would join him on some leg of the cruise when I could find the time.

Hal started from Piney Narrows Yacht Sales in Chester, Md., went north to Connecticut, south to Miami then north again. He phoned from Florida, Georgia, the Carolinas, Virginia and New Jersey, but it wasn't until he was in our backyard at Bridge Boat Sales on City Island, N.Y., that I could arrange to meet him aboard Dutchess.

The 44' 3" x 14' 11" x 4' yacht has 6'3" freeboard forward and 5'3" aft and displaces about 32,000 pounds. Though Trojan has been building boats for close to 30 years, her design was researched from scratch, calling on specialized knowledge within and without, with emphasis on controls and their placement, engineering as related to strength, stability and noise factors in particular, and layout as projected from extensive dealer and customer feedback - and in the end, a well-known interior decorating firm, the H. Chambers Co. of Baltimore, was called in to create a tasteful decor.

Looking through the Dutchess at Bridge Boat Sales, I found she was thoughtfully conceived. The controls on the flying bridge and below are centrally located in well-designed consoles, with the instruments carefully grouped and clearly labeled. Engine alarm system indicators are directly below centered tachometers on the main console and accessory switches with lights are in an overhead cabinet that also has room for electronic gear. The console itself is hinged at the top and tilts toward the windshield to expose the wiring. A chart counter and drawer are to port of the helm with a particularly neat electrical panel below and there are port and starboard lockers in the sides of the bridge enclosure. Visibility all around is very good.

I saw the hull in a lift at the yard. She has sharp entry, a well-flared bow and hard chines, is deeply V'd in the forward sections (which have molded-in lifting strikes) and becomes a shallow V at the transom. The engine exhaust pipes exit directly through the hull bottom inboard of the chines and about a third of the length forward of the transom, and V'd clam shells forward of the ports deflect the water flow. Inside, in the neatly finished and well-insulated engine compartment, I found high copper risers to carry the exhaust well above the waterline and then turn it down to the bottom—and exiting at the sides, just below the boottop, are relief ports to reduce back pressure at idle speed. Later, before a short run, I watched the exhaust bubble up at the sides, and then, as we sped along in open water, rise as a ban well aft in the wake.

The layout, as the photos indicate, provides for maximum livability in the 44-foot length: a spacious master stateroom with good stowage and a private head with shower; a large and comfortable guest stateroom, also with good stowage and separate access to a head with shower; a saloon that allows flexibility in arrangement of furnitufe that can include a convertible to increase berths to six and has room for a wet bar and icemaker; a fully equipped galley with good stowage, a "wine cellar" beneath a hatch in the sole and the option of a trash compactor; and a dinette that wisely remains a dinette without the curse of convertibility. For an owner who doesn't want a dinette, a stateroom with vanity, hanging locker and upper and lower berths can be substituted. The after stateroom, incidentally, will be avail- able with twin berths in the near future. A spacious able with twin berths in the near future. A spacious bridge deck, a forward deck with seat lockers that house the shore cables, and the optional flying bridge further extend the living area.

I wasn't able to accompany Hal when he left City Island, but about ten days later, with Whittaker public relations man John Wisdom, John's son Jason and friend Starr Erani, I joined him at Bill Petzold's yard in Portland, Conn., about 27 miles up the Connecticut River, to spend a night aboard and cruise the 90 miles or so to his final destination: Ed Valery's Norwest Marine in Norwalk, Conn. Before we left, we learned that Bill had sold Dutchess to Mr. and Mrs. Donald Seifel of Wethersfield, Conn., and that she would come back to the Petzold yard after a brief showing in Norwalk.

We ran down the beautiful river at an unhurried pace, but when we rounded Saybrook Light at the mouth, Hal pointed the bow toward Port Jefferson, where we were to stop for some photography, and eased the throttles up. On a glassy surface, Dutchess rose quickly to plane and held an unwavering attitude. She's powered by Johnson and Towers GM 6-71 diesels, rated 310 hp. each at 2,500 r.p.m., and they turn four-bladed 24" x 24" propellers through 2:1 reduction. (Optional engines are Cummins V-903-M diesels with the same reduction or twin 330-hp. MerCruiser or Chrysler gasoline engines with 3:1 reduction.) Cruising at 2,300 r.p.m., the 6-71's move her at a shade under 18 statute m.p.h. at which speed she has a range of 213 miles on a 320-gallon fuel capacity. The top speed is 21 m.p.h. where the range is reduced to 168 miles. As an option 100 additional gallons of fuel can be carried. With diesels, a 12-kw. generator is standard, and a 10-kw. generator is provided with gasoline engines. She carries 200 gallons of fresh water.

There was no opportunity to experience the boat in rough seas, but the hull form is one that should do well. She has a long keel and large, deep rudders, and she tracked well and maneuvered easily as we made our way to Port Jefferson.

The radio crackled the boat's name as we ran toward Norwalk. It was Ed Valery, waiting outside the harbor in a sport fisherman. He led the way to Norwest Marine, from which we all went our separate ways. In all, Hal had run over 3,000 miles with Dutchess in 108 days. He touched the bottom a few times but otherwise had no serious problems - and that speaks pretty well for the Trojan F-44 Motor Yacht. 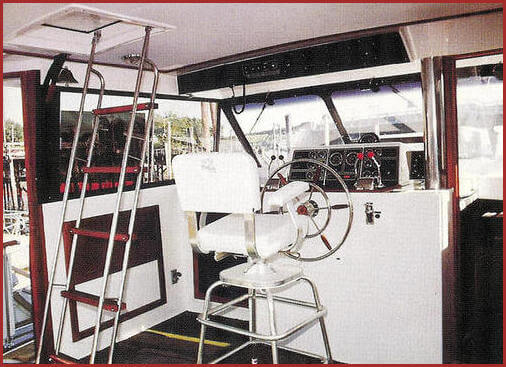 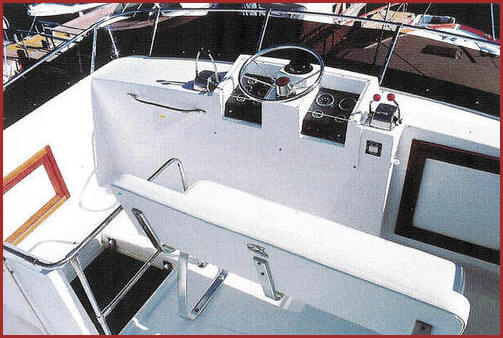 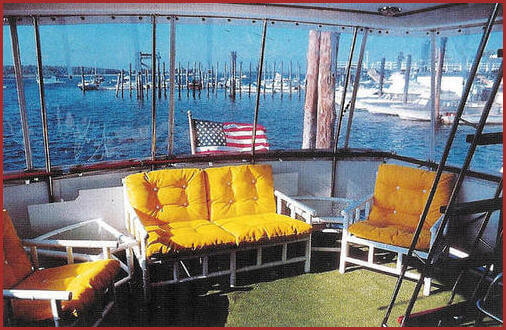 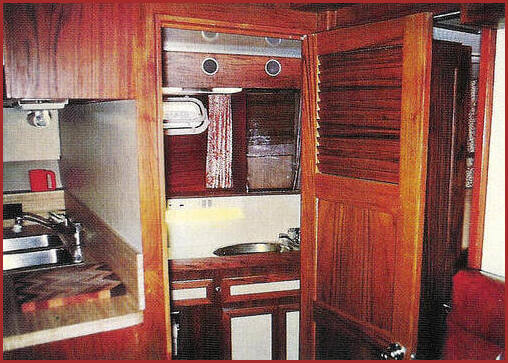